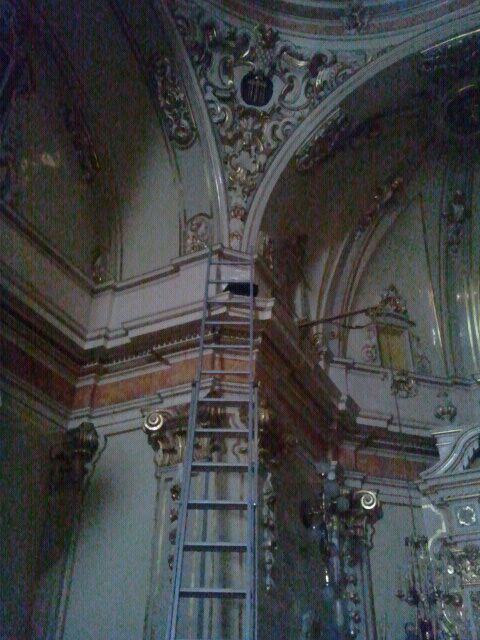 “Sounds never cease to exist, we are the ones to stop being able to perceive them or they become other forms of energy. With the appropriate technical means, we should be able to hear again the sounds that surround us constantly coming from the past”

This is the hypothesis that is the basis for my most recent sonic proposals: for ensemble HaP ( Alicante Festival 2010 ), The Oracle : Tell me a secret in collaboration with visual artist Gema Alava (Estampa Sound-In IFEMA Madrid 2011); and FANtasy in collaboration with the performer Claire Cunningham (Dansens Hus Stockholm 2011) .
Missa Brevis, which starts with an organ performance, uses a dissolutive process which generates a sonic field enhancing hidden sonorities and implicit resonances, keeping itself in endless evolution and beautiful interaction with the space it occupies.
This concert-installation was premiered in May 2012 in the 8ª Mostra Sonora de Sueca (Valencia, Spain) commissioned by IVM (Institut Valencià de la Música). The specific space for which this work was conceived was a small chapel with very particular sonic behaviour – plenty of domes, corners and small oratorios where the sound bounced freely without a clear sensation of sonic source and directionality. Later on, the piece was translated for the main Patio of La Casa Encendida (Madrid, Spain) for the SON Festival (March 2013). This new version required adapting the piece for a less intricate space, taking advantage of the verticality of the Patio and all the balconies, open windows, and terrace, from which the sound would come to the aforementioned patio. I had to recreate the sonic material for a new space to excite and a new exciter instrument, in this case a Realejo built by Federico Acítores. For this third version ofMissa Brevis, specially adapted for the characteristics of Musiikkitalo’s Agora foyer and for the given temporal dimensions, being a dissolution of the original length of five days.
I feel that being part of this year’s MuTeFest is a natural closure for this work, since the ideas by which it was formed were conceived while I was living in Finland, and some of the sonic materials were indeed created in the Organ Hall of the Sibelius Academy’s R-talo.